Elaine Somerville ~ Psychic Medium
Elaine was born in Newcastle upon Tyne, England, with the rare ability to connect to spirit. She works in her own unique way, which brings comfort and amazement to many who see her work or visits her. Elaine was born with her spiritual awareness, over the years she has sharpened her abilities, bringing comfort and healing to those dealing with the loss of a loved one due to the physical death.

Growing up
I've always been aware of something but didn't know what that something actually was.
My earliest memories are of being in my cot and talking to someone, it would freak my parents out as i didn't sleep much and it would mainly happen at night. Many happenings, which may seem weird or unnatural to many, are "natural" to me.  I grew up around mediumship and spiritual churches as my maternal grandmother was a medium, affectionately known in the family as " the witch", i often wonder if my dad was psychic as he was so in tune and when i think back would be predicting outcomes without realising it which, i would later do but again not realise it.
As a child i'd know who i was going to bump into and remember one time, around 8/9 years of age, a voice in my head would talk to me and tell me what was going to happen, but it would be right...i began to accept "the voices in my head"
​I would later realise who or what the voice was!

​​​​I first stepped into a spiritualist church at 14 years old and would watch mediums, fascinated and wondered who was telling them the information, i'd look around to see if anyone's mouth's were moving or was anyone crouched down whispering to them. I had no idea that the voices i was hearing in my head, were the same kind of voices telling them!
​I was told many times since my teens i had "the gift" but never thought anything of it, just shook it off as none of it made sense, it took a long time for me to understand that when i'd talk to myself and answer myself, i was actually talking to loved ones in spirit, those i would see as "ghosts" were also loved ones in spirit.

In my 20's, "things" would happen, tv's would turn on themselves, i remember one incident when a thud was heard in my passageway, a bar of soap was lain there..it had flew of the soap holder round a corner and landed approx 6foot away, with only myself and my husband both in a different room together, so neither had thrown it. As i started my family, i had an overwhelming feeling of being protected and "things" would happen on a weekly basis but i had no fear. My grandma was spiritually aware and a medium, her words would ring in my ears "It's the living that hurt you, not the dead"

Over the next few years, my connection became stronger and spirit made it very hard to ignore them but i still didn't see myself as a medium, it just didn't register in my head and i actually convinced myself i was schizophrenic after an event at 17 which led me to believe that.
It was not until a medium i knew from a church, asked me to take a service with him, that it all fell into place and everything became clear! I would be asked by various mediums to take part in events and services weekly (sometimes twice a week) which i would go along to "before it ran out".....I finally accepted i was a medium.
I've been blessed with many opportunities since then, from opening and running 2 very successful spiritual centres to demonstrating and teaching internationally in Canada, Ireland and nationally in the UK, hold readings for celebrities and olympic medallists.
I can truly say i've embraced being a medium and the best part is the enjoyment i receive when connecting to loved ones to bring healing.

Psychic Development
In those very early years i would sit in meditation upto 2 hours a day, i'd constantly talk to the voices in my head, who i now knew were my guides teaching me!
I attended masterclasses at the Barbanell Centre, Stafford UK and the world famous Arthur Findlay College in Stansted Essex. I took workshops with world renowned mediums Billy Cook and Paul Jacobs and a year long advanced medium mentorship with Paul Jacobs. I still continue to take the time daily to sit with spirit.

Elaine lost her husband in 2008, he visited her as he passed...
​​My husband Peter tapped me on the shoulder at 1.22am on August 2nd 2008 to let me know he was leaving....he was in the Marie Curie hospice approximately 8 miles away at the time but was taking his transition over to spirit.
He came straight to me so i could prepare myself to tell my children Alex and Nathan (15 & 10 at the time) that their dad had lost his battle against cancer. They were Peter's world and his last thoughts had been to make sure they were ok

What do people say? 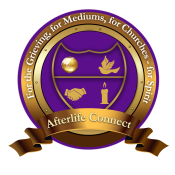